CM Games in eastern Tennessee has run StarCityGames.com Invitational Qualifiers since the program began, part of a fourteen-year stretch of running Magic: The Gathering events. Their six stores and player bases have grown along with the In-Store Programs. I asked Mat and Steve, the tournament organizer and owner, respectively, how our program offerings have benefited them over the last three years.

I began asking about the pros and cons of running so many Magic tournaments at multiple stores and there were surprisingly few cons for CM Games. While they had some issues when they started running events at more than one store, things are now running “like clockwork.” The largest pro is their ability to advertise in-store and via word of mouth through their network of stores. Of course, they have to plan meticulously to prevent overlap while avoiding conflicts with other events in the area.

Magic has experienced a boom in the past four years and CM Games has benefited from this. “StarCityGames.com has offered us some great opportunities to run some really high level events with great advertising, and we’ve been able to run some really awesome events because of them! Additionally, we’ve been able to run many PTQs thanks to the growth of the game, and due to the growth of player bases in surrounding areas CM Games has added five new locations since it first opened.” One of the major goals for In-Store Programs here at StarCityGames.com is to partner with local stores like CM Games and improve the local player base, so this is great for our team to hear!

When I asked what the initial appeal to the Invitational Qualifier program was for CM Games, I received this response: “The IQ program was very appealing as it was an event series that gave players an end 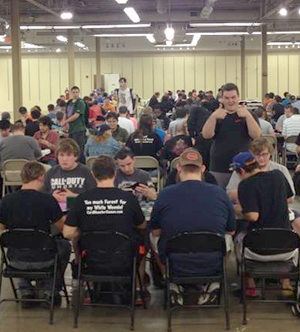 goal – not just something that took place on a given day, and the results forgotten immediately after; rather, it gave players a reason to continue coming back for more!” In-Store Programs have evolved since CM Games hosted their first IQ, and they’re very excited to host Game Night at two of their stores. “The most striking thing so far is the new Game Night program that will surely bring new players in for some higher level competition – even on a weekly basis! These type of events will lend to an overall improvement in the level of play of local communities, and in return even better results at the larger events.”

CM Games is also happy to be a part of another new In-Store Program, the Premier Invitational Qualifier. They will host one in Knoxville on October 18th, and can already feel the player excitement through all the talk and questions in their stores. “The upcoming Premier IQ/PTQ: Khans weekend has got all the players in our area working on their game week in and week out.”

CM Games has locations all over eastern Tennessee. You can learn more about their upcoming events on their main location’s Facebook page.

"The StarCityGames.com Super IQ series has been a tremendous success in our community. The SCG team did a phenomenal job in orchestrating effective advertising and promotion of our event, providing us terrific support, help, and advice, and helped us pull out all of the stops to make a really outstanding event. We will be running many more of these events in the future, and I would encourage any store looking to draw in new guests and build their Magic community to invest in this program—your store will thrive for it."
Steven Briggs
(Griffon Events)

To ensure your advertising is correct, double check the Facebook event details and email any changes to isp@starcitygames.com.