Pulling up stakes and leaving a store in Montana to start a new business in Tampa, Florida can’t be easy, but Todd Schreier of Learn 2 Play Games makes it look that way. Within four weeks of opening, Learn 2 Play reached Advanced on the Wizards Play Network and regularly hosts successful Invitational Qualifiers. While Todd attributes some of his growth to StarCityGames.com In-Store Programs, much of it is due to his abilities as a tournament organizer and store owner. Read on as he shares some of his secrets and tips with me.

Todd’s first store, Good Games, opened in 2009 with a tournament that drew players from all over Montana for a foil playset of Baneslayer Angels. He ran a series of tournaments offering Moxes when Learn 2 Play opened. Running tournaments with high-profile prizes is invaluable in getting a new store’s name out to the players, but Todd also said, “Implementing the Invitational Qualifiers in Tampa, Florida is the best decision I have made for tournament play. I went from basic to Core in four days, Core to Advanced in four weeks. Each tournament the turnout keeps on getting better.”

With a second Learn 2 Play location opening soon, Todd told me, “We are moving up to have four IQs a month. I trust the brand and the team behind all that is StarCityGames.com.”

When I asked what the secret to his growth was, he responded with, “Be the customer’s friend! As customers walk into my stores, I do not push for a sale, but instead I have my staff introduce themselves, shake the customer’s hand, and simply be the customer’s friend. The sales come naturally. It can be difficult to walk into a new store for the first time. Our staff learns your name and every single customer is greeted not because we have to, but because we are genuinely glad to see them. The L2P culture keeps customers driving past 3-4 other stores and spending more than an hour drive each way just to be a part of our community.” He added that it helps that they run more StarCityGames.com Invitational Qualifiers than any other store in the area. 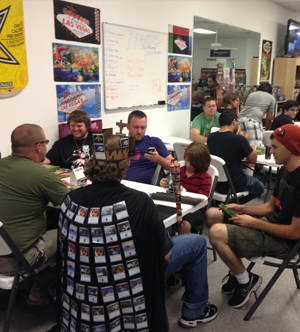 Todd had an unusual but thought-provoking answer when I asked him what makes his events memorable for the players. He said, “The best events are the non-memorable ones. Players often remember and speak of the events that start late, were understaffed, and did not honor advertised prize support. It’s simple, just run a smooth event, properly staff it with competent judges, and always honor prize support no matter what the attendance turns out to be. It is important to keep your word and reputation in the highest of regards. Let’s not kid ourselves; we are in the entertainment industry. Every single day people have the option to spend their free time doing hundreds of things. We at L2P are honored and privileged to have customers come back each and every week making our store their favorite home away from home.”

Check out Todd’s Facebook Page to learn more! If you would like your store to be featured in this column, send an email explaining why to storespotlight@starcitygames.com. If your store is in the Store Spotlight, we will also send you a coupon for a FREE Swag Pack for one of your events!

"Star City Games® extra promotion for the event seemed to do really well in terms of getting more players to the venue as opposed to the other PPTQ's in the same area...everyone was happy to have SCG involved as they always give out good prizes."
Mike Horberg
(Level 2 Judge)

Have more seats available than you think you will use for an event!

The 2014 Spring Season is Here!
Scroll to top