This month’s Store Spotlight focuses on Black Gold, located in Littleton, Colorado. Owner Carl Van Laethem talked with us about running successful Invitational Qualifiers and keeping up with a busy store. He started his business in the mid-90’s, focusing solely on sports memorabilia. Around the time Mirrodin was released, Carl had so many requests for Magic cards that he decided to devote a section of his shop to the game. Carl noticed the drawing power of the game right away, and within six months his store reached Advanced status with the Wizard’s Play Network. As Magic began to take over his sales, he made the move to a new location across the street from his previous one to devote “all of my energy to Magic.” Carl prides himself in maintaining a safe, clean, and fun environment for all of his customers. 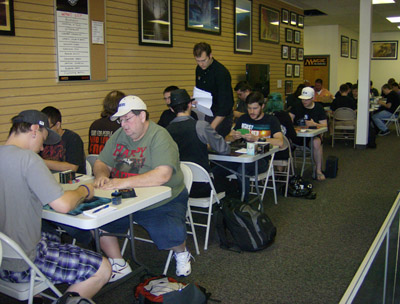 Carl has been running StarCityGames.com In-Store Programs events for a year. He feels that the Invitational Qualifier program is “an awesome way to get players to participate in a very competitive environment who may not usually patronize your store.” When asked what makes these events successful for him, he attributed his success to the entry fee to prize support ratio. “SCG has set the parameters so that both the players and organizer can be satisfied.” he said, adding “If these events didn’t produce a reasonable profit, then I wouldn’t run them.”

We asked Carl what advice he would give to a store owner looking to turn new customers into regulars. He said, “Once a new player arrives at our store, they quickly realize that we have everything they could want.  Our singles selection is one of the largest around. You can get anyone to drive an hour to play in a large event but you need more than that to get them to drive an hour to make a purchase.” He also added that he increases his prize support when his events get really good turnouts. Carl focuses on his community and building a rapport with his players. “I like to think that my tournaments are successful because of my honesty and dedication to the players and the game itself.”

Another point that Carl drives home is attention to time. “I feel that players have an extra bit of respect for organizers that are prompt.” He said. “This means opening the store on time. Ending registration on time. Starting ALL rounds on time.” Being aware and concerned about the players’ time will make for a happy player base. Not to mention your tournament will be ending as projected. “Once an event starts late it seems to have that snowball effect where every round gets later and later and later and later.” Starting promptly means ending promptly!

Carl is the owner of Black Gold in Littleton, Colorado. To learn more about his store, visit Black Gold’s webpage. If you would like your store to be featured in this column, send an email explaining why to storespotlight@starcitygames.com. If your store is chosen for Store Spotlight, we will also send you a coupon for a FREE Swag Pack for one of your events!