Tales of Adventure and its owner Mike Caffrey ran one of the first Premier IQs in the country. What makes the accomplishment even more remarkable is that this time last year, Tales of Adventure hadn’t opened yet. Before becoming a store owner, Mike worked in another shop and was a Magic judge.

“Transitioning from a judge to a store owner isn’t easy,” says Mike. “I’ve had to curtail my judging activities outside the store and bring in judges for the majority of my events.”

Mike’s judging experience, however, played a crucial role in his rise as a tournament organizer. “Many of the skill sets learned from judging, including teamwork and customer service, translate well to the retail environment. The judge program also provided me with a strong network of other judges, players and stores to rely on when running an event, including several great people on speed dial to handle the most unusual of circumstances.”

Though Mike and Tales of Adventure found early success, it wasn’t all smooth sailing. He describes on early stumble: “Our first large event, where we gave out 40 Revised dual lands, had 170 players. The room was set up for 120, and there weren’t extra tables or chairs for those players. We realized early on that we would need additional tables and chairs. We purchased tables from a Lowe’s and borrowed chairs from another store in the area to seat everyone without too much delay. Since that event, every time there has been extra money in a month, we’ve purchased extra tables and chairs.”

One piece of good fortune: Tales of Adventure’s location. There’s “a vacant, 10,000 square foot building adjacent to the storefront,” says Mike. “We’ve used this area for tournaments and have renovated it to create a great play experience.” 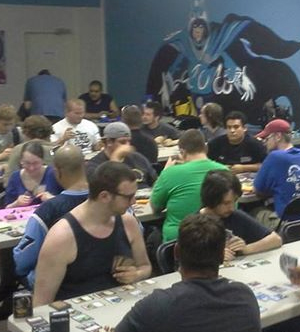 Not surprisingly, Mike is a major supporter of keeping a Magic judge on staff. “Players like having a uniformed judge because it shows the store cares about competitive, fair play. It also lets an owner expand staff for a busy event by bringing in an experienced judge solely to handle the tournament operations and letting the normal employees handle sales, making more money.”

Mike also has words of wisdom for tournament organizers looking to make the leap from Friday Night Magic to bigger events: “Treat every tournament like a big tournament. Focus on running a smooth, fast regular IQ first, and use it as a training ground to test out your staff and local judges. Then figure out what needs to get fixed or improved for running a larger event. Round 1 of a 150-person event is not a great time to realize your scorekeeper doesn’t know how to put penalties in the computer. At a 40-person event everyone can learn together to create a better experience.

“Players in bigger events have an expectation of fast events, with little waiting between rounds. A good event with fewer than 100 people should have a round starting right around every hour. Starting the Top 8 early and letting players get home at a reasonable time makes it more likely for people to drive two hours to play in your event.”

Check out Tales of Adventure’s (five-star-rated!) Facebook page to learn more about this great new store!

"I can run an event with a solid prize structure and entry fee and pull good numbers from the players I can reach through normal marketing channels, but tack on the StarCityGames.com® label and add-ons and a whole new crop of players that may not have normally made the drive to my shop suddenly do.  With the marketing that StarCityGames.com® does for your event fee, half of your work is already done for you."
Ryan Seymore
(Comic Town)

To ensure your advertising is correct, double check the Facebook event details and email any changes to [email protected]

Where did Swag Packs go?

What day of the week is best for my Game Night?
Scroll to top